GST has just completed two years. An area that concerns me is that we have huge pending litigations from pre-GST regime. More than Rs. 3.75 lakh crore is blocked in litigations in service tax and excise. There is a need to unload this baggage and allow business to move on. I, therefore, propose, a Legacy Dispute Resolution Scheme that will allow quick closure of these litigations. I would urge the trade and business to avail this opportunity and be free from legacy litigations.

(i) covers past disputes of taxes which have got subsumed in GST namely Central Excise, Service Tax and Cesses.

3. The scheme to be available from a date to be notified.

4. Taxes/Cesses covered under the Scheme.

1. One time measure for liquidation of past disputes of central excise and service tax.

2. To provide an opportunity of voluntary disclosure to non-compliant taxpayers.

Cases covered under the Scheme

2. An amount in arrears.
3. An enquiry, investigation or audit where the amount is quantified on or before 30th June, 2019.

Exclusions from the Scheme

1. Cases in respect of excisable goods set forth in the Fourth Schedule to the Central Excise Act, 1944 (this includes tobacco and specified petroleum products; Ch.24-Tobacco; Ch.27-Coal).

2. Cases for which the taxpayer has been convicted under the Central Excise Act, 1944 or the Finance Act, 1944.

4. Cases pending before the Settlement Commission.

Any person falling under the following categories is eligible, subject to other conditions under the Scheme, to file a declaration :

(i) Who has a SCN for duty or one or more appeals arising out of such notice pending and where the final hearing has not taken place as on 30.06.2019.

(ii) Who has been issued SCN for penalty and late fee only and where the final hearing has not taken place as on 30.06.2019.

(iii) Who has recoverable arrears pending.

(iv) Who has cases under investigation and audit where the duty involved has been quantified and communicated to party or admitted by him in a statement on or before 30th June, 2019.

(v) Who want to make a voluntary disclosure.

Enquiry or investigation, under any of the indirect tax enactment, shall include the following actions, namely : 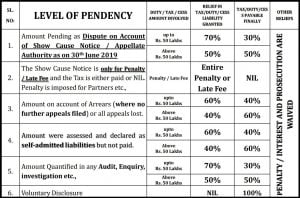 I. Scope of tax relief covered under section 124(1) (b) with respect to SCN for late fee and penalty only where the amount of duty in the said notice has been paid or is NIL.

(i) The tax relief shall be the entire amount of late fee or penalty.

II. Cases of appeal before the appellate forum (Commissioner (Appeals) /CESTAT) where appeal has been heard finally on or before the 30th day of June, 2019.

(i) ‘No, the person will not be eligible.

III. Scope under the scheme when adjudication order determining the duty/tax liability is passed and received prior to 30.06.2019, but the appeal is filed on or after 01.07.2019.

(i) No, such a person shall not be eligible.

V. Treatment of Pre-deposit : Any amount paid as pre-deposit at any stage of appellate proceedings under the indirect tax enactment or as deposit during enquiry, investigation or audit, shall be deducted while issuing the statement indicating the amount payable by the declarant.

Benefits available under the Scheme

1. Total waiver of interest, penalty and fine in all cases Immunity from prosecution.

2. In cases pending in adjudication or appeal, a relief of 70% from the duty demand if it is 50 Lakh or less and 50%, if it is more than 50 Lakh. The same relief is available for cases under investigation and audit where the duty involved is quantified on or before 30th June, 2019.

4. In cases of voluntary disclosure, the declarant will have to pay full amount of disclosed duty.

7. No input tax credit for any amount paid under the Scheme can be taken.

9. In cases where pre-deposit or other deposit already paid exceeds the amount payable as indicated in the statement of the designated committee, the difference shall not be refunded.

9. Where any material particular furnished in the declaration is subsequently found to be false, within a period of one year of issue of the discharge certificate, it shall be presumed as if the declaration was never made and proceedings under the applicable indirect tax enactment shall be institute.

Author is Chartered Accountant by Profession and having vast experience in the field of Taxation.