Presently, cycles and other cycles (including delivery tricycles), which are not motorised are chargeable to GST at the rate of 12%. The rate of 12% has became a hurdle for the leading bicycle maker Hero Bicycles.

Leading bicycle maker Hero Cycles urged the government to reduce GST on bicycles from 12 per cent to 5 per cent ahead of the Union Budget to revive demand in the rural markets. The company has also sought extension of FAME-II benefits to electric bicycles. 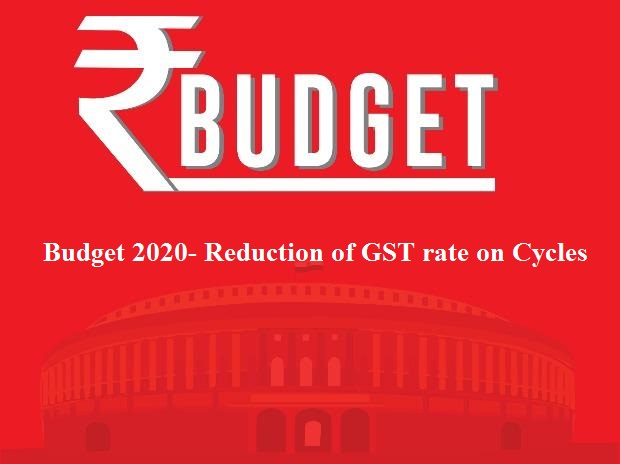 FAME 2 was announced in first week of March 2019, which proposes to give a push to electric vehicles (EVs) in public transport and seeks to encourage adoption of EV’s by way of market creation and demand aggregation.

FAME 2 will offer incentives to manufacturers, who invest in developing electric vehicles and its components, including lithium-ion batteries and electric motors.

FAME 2 scheme will also help in improving charging infrastructure. The centre will invest in setting up charging stations, with the active participation of public sector units and private players.

Issues faced by the makers of cycle- as per Hero Cycles:-

• The bicycles are largely used by low income group and rural populations. The rate of GST seems to be high. Therefore, slashing GST from the current 12 per cent to the lowest 5 per cent slab would make the cycle cheaper and affordable.

The chairman of HERO MOTORS COMPANY stated that:-

The budget must focus on reviving slumping demand across the country through a series of measures including re-adjusting GST slabs to put more disposable income into the hands of people.

Benefits of extending FAME 2 & reduced rate of GST on cycles:-

• It is noteworthy that lowering the GST rate on cycles from the present rate of 12% to 5% would provide relief to millions of low income households.

• Electric bicycles are both eco-friendly and space friendly and also offer a viable solution to the problem of range anxiety that comes with lack of charging infrastructure as they can be easily pedaled back in case of battery loss.