Write Article
by Reetubaraik 7 months ago2 weeks ago

Ms. V.Mandlik, learned counsel for the respondent.The petitioner before this Court has filed this present petition with a prayer for issuance of an appropriate writ order or direction directing the Commissioner of Income Tax II to refund a sum of Rs.11,16,643/- which is excess tax paid by the petitioner on his exempted income for the financial year 2008-09 to 2015-16.

The facts of the case reveals that the petitioner was commissioned as an Officer in the Indian Army on 21.3.1976 on the rank of Second Lieutenant and has served with dedication for more than 40 years. He is a decorated soldier of the Indian Army. He was posted in Kashmir. He has participated in Operation Rakshak and also has participated in the Kargil war. He has received various decoration and various medals from time to time details have been furnished in the writ petition.

The petitioner suffered a Battle Casualty and on account of battle casualty by order dated 22.4.1999 issued by the Army Head Quarters, he was medically boarded out w.e.f 30.11.2007, with disability pension.

The petitioner’s contention is that Central Board of Direct Taxes vide memorandum dated 2.7.2001 has notified that the disability pension received by the Officers of the Indian Armed Forces is completely exempted from Income Tax.

The petitioner’s further contention is that he is receiving 30% of disability pension for life on account of disability suffered by him and a pension payment order was issued on 1.12.2007. The petitioner being an law abiding citizen that too an Army Officer, who is certainly not aware of the procedural aspect of the Income Tax Department of filing various documents and to claim exemption, as his income tax was deducted at source while he was in service, with a bonafide mistake paid the income tax on his entire income from 2008 to 2016 including the disability pension.

The petitioner as stated in writ petition has received the undermentioned amount by way of pension :- 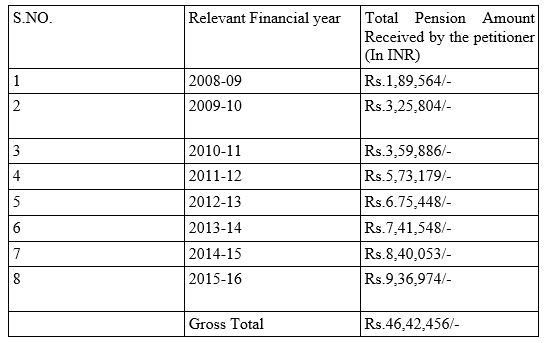 The petitioner in the year 2017 had requested the Assessing Officer to refund the amount. One such representation/claim of the petitioner dated 6.12.2017 is Annexure P-8. Inspite of repeated requests, the respondents have not refunded the amount and the petitioner is running from pillar to post as argued by the learned counsel.

A reply has been filed in the matter and as usual all kind of technicalities have been raised by the Income Tax Department in the matter that too in respect of an Army Officer, who has dedicated his entire life towards the service of the Nation, the same Army Officer who has defended our motherland including the ‘Babus’ sitting in the Income Tax Department is being subjected to harassment. The Colonel, who has made the life of Income Tax Officials and all of us smooth and comfortable and all those Income Tax Officers, who were able to sleep peacefully in their home because the borders were being guarded by the Army Officer, who is the petitioner before this Court, are trying to put all kind of spokes in the matter of refund for which he is genuinely entitled by virtue of CBDT notification. 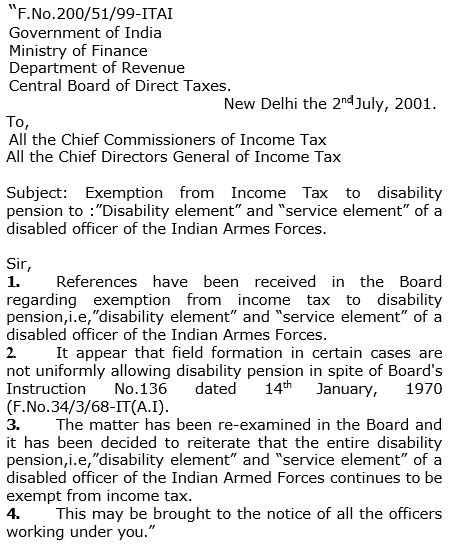 For assessment year right from 2008-09 to 2015-16, the Army Officer has reflected the income received by way of disability pension in his income tax return as stated in the writ petition and inspite of the fact that the aforesaid income was exempted, the same was added in the total income by the income tax department. The Income Tax Officer in all fairness while computing total income as there was a specific averment that the officer is receiving disability pension should have passed an order taking into account the notification of CBDT dated 2-7-2001. Even if it was not done at the time of assessment because there was no claim by the Officer, the amount could have been refunded at the first available opportunity when the officer represented to the department and submitted the application for refund of the amount. The application was submitted for the first time as stated in the writ petition on 6.12.2017.

In the considered opinion of this Court, as the income of the petitioner was exempted, the department does not have any other choice except to refund the amount and the disabled Army Officer cannot be made to run from pillar to post on account of various technicalities as stated in the writ petition.

This Court is aware of its limitation of not Travelling and Traversing into the prohibited territory of “Legislating through Court orders” however this Court feels duty bound to state the obvious, more so when the “Call of Duty” of a Judge inspite him to Underline the requirement of brushing aside the “Administrative Technicality” while Dispensing Justice.

Our Army Soldiers, Naval Officials and Fighter Pilots are Day and Nights protecting Our Territorial Borders from Enemy Infiltration and Attacks and even while putting their life to the greatest risk, are keeping all Citizens safe and Secure and making Our life free from all such Dangers, where they don’t think of “Technicalities” while Fighting with Enemies at the Front, as to whether pulling the Trigger of their Gun would invite a “Court of inquiry” and from this practical perspective this Court wants to express its concern for not putting too much of technicalities in such matters by those who are invested with Administrative Powers to deal and decide the affairs of the Personnel of Indian Armed Forces.

The Court records and reiterates its absolute commitment to adherence of Rule of Law in its strictest terms, without carving out any exception to it, however it intends to convey its concern for the welfare of the “War Heros” who marvels at the Borders and within the Country, should not be unnecessarily Harassed or Troubled, for Technical adherence to some archaic administrative procedures having no thoughtful purpose sought to be achieved, while denying Legitimate Relief to the Members of the Armed Forces.

Resultantly the respondent is directed to refund the entire amount of income tax they have recovered, which was an exempted amount and which the petitioner has paid in respect of his disability pension.

The exercise of refunding the amount be concluded within a period of 30 days from the date of receipt of certified copy of this order. Authorities shall be free to pass appropriate order in the matter of refund and the petitioner shall be entitled for interest @ 12% per annum from the date the amount was deposited with the income tax department till the amount is paid.

It is made clear that in case the order passed by the Court is not complied within 30 days as directed the rate of interest shall be 18% per annum from the date of entitlement till the amount is actually paid to the petitioner.

The petition is accordingly, disposed of.