Sec 68 Addition on basis of loan from directors

The assessee has filed this appeal challenging the order dated 09.08.2019 passed by Ld CIT(A)-3, Bengaluru and it relates to the assessment year 2012-13. The Ld A.R did not press ground no.2, wherein a legal issue has been urged. Remaining grounds urged by the assessee relate to the following issues:-

(a) Addition of outstanding liabilities u/s 68 of the Act

(b) Addition of loans taken from directors u/s 68 of the Act.

(c) Addition of Advances received on sale of sites u/s 68 of the Act.

2. The assessee is engaged in the business of plotting and selling of housing sites.

3. The first issue relates to the addition of outstanding liabilities made u/s 68 of the Act. The AO noticed that the assessee has purchased lands from certain persons, but was showing a sum of Rs.2,99,20,000/- as still payable to the sellers of land as on 31.3.2012. The break-up details of outstanding amount was given by AO as under:-

It can be noticed that the AO has not given complete details pertaining to the amount of Rs.2,99,20,000/-. The assessee submitted that the payments to the sellers of land has been stopped due to pending legal problems existing in the land purchased by it. Hence the AO asked the assessee to produce the creditors, but it could produce only sons of Ms.Beeramma, who confirmed that the sum of Rs.72.00 lakhs was not received by her. Accordingly, the AO accepted the outstanding credit balance of Rs.72.00 lakhs and added the remaining amount of Rs.2,27,20,000/- as income in the hands of the assessee u/s 68 of the Act. The Ld CIT(A) also confirmed this addition. 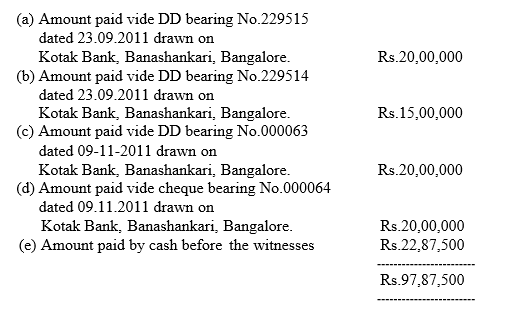 5. With regard to Mr. Kempa Hanumaiah, the Ld A.R submitted that the land was purchased by the assessee from the above said person on 17.10.2011 by paying post dated cheques, which are mentioned in the payment schedule in the Conveyance deed. The payment schedule is available at page 247 of the paper book. The Ld A.R submitted that most of the cheques have been dated in the month of December, 2011. He submitted that these cheques have not been enchased by 31.3.2012 and hence the outstanding amount is shown against the name of Mr. Kempa Hanumaiah.

6. The Ld D.R, on the contrary, submitted that the cheques have a limited life of 3 months only, i.e., if the cheques are not encashed within 3 months, they become stale and loses its value unless the same is revalidated. He submitted that, in the case of land transactions, offering of credit by the sellers is against human probabilities. Hence the Ld CIT(A) has taken the view that the assessee could have settled the payment by way of cash outside the books of accounts.

7. We heard rival contentions and perused the record. Before us, the Ld A.R also argued that the transaction of purchase of land is a trading activity in the hands of the assessee. Hence, the assessing officer, after accepting the genuineness of purchases, could not make addition of outstanding creditors u/s 68 of the Act. However, we notice that the assessee has failed to produce both the sellers referred above before the AO. However, the Ld A.R is able to demonstrate that the payments have been made after 31.3.2012. However, all these explanations require verification at the end of the assessing officer. We notice that the tax authorities have not examined these finer details. We have noticed that the assessing officer has given details of outstanding creditors to the tune of Rs.2,50,95,000/-, while the amount of sundry creditors is mentioned initially as Rs.2,99,20,000/-. The addition has been made by taking the figure of Rs.2,99,20,000/- only. Accordingly, we are of the view that this issue requires fresh examination at the end of the AO. Accordingly, we set aside the order passed by Ld CIT(A) on this issue and restore the same to the file of the AO for examining it afresh by duly considering the explanations of the assessee. In the set aside proceedings, the AO may examine the above said sellers of land, if it is considered necessary.

8. The next issue relates to the addition of Rs.1,07,46,510/-, being the loan received from two directors, as unexplained cash credit u/s 68 of the Act. The AO noticed that the assessee has received following amount from two of its directors as detailed below:-

The assessee could file only ledger account extract of above creditors. Since the assessee did not file any confirmation letter from them, the assessing officer assessed a sum of Rs.1,07,46,510/- as unexplained cash credit u/s 68 of the Act.

10. We heard the parties on this issue and perused the record. There is no dispute that the impugned amounts have been received from the directors, who are actually managing the affairs of the assessee company. Before Ld CIT(A), the assessee has submitted bank statements of directors and also ledger account copies. Before the AO, the assessee has submitted copies of their income tax returns. During the course of hearing before us, the Ld A.R also submitted that the assessee could not furnish all these details, since there was change of counsel appearing before the AO. The fact of change of counsel has been noted by the AO in paragraph 14 of his order. Under these set of facts, in the interest of natural justice, we are of the view that the additional evidences should be admitted and the assessee should be given opportunity to substantiate the loan taken from directors. Accordingly, we admit the additional evidences. Since these evidences require examination at the end of the assessing officer, we set aside the order passed by Ld CIT(A) on this issue and restore this issue also to the file of the assessing officer for examining it afresh. The assessee is also directed to furnish all the information and explanations to substantiate the loan taken from the directors.

11. The last issue relates to the addition of Rs.2,25,16,003/-, being the advance received from customers towards sale of plots. The AO noticed that the assessee has received advances for sale of plots from 15 persons in respect of Nelamangala Project. The total amount received was Rs.2,40,66,003/-. Since the assessee could not furnish any confirmation letters, the AO issued notices u/s 133(6) to all the 15 persons. Out of the same, eight letters were returned unserved with the noting, addressee left, incomplete address etc. Seven persons to whom the notices were served did not respond. The assessee filed copies of bank statements with the submission that some of the advances have been returned back. The AO did not accept the same. Accordingly he added a sum of Rs.2,25,16,003/- to the total income of the assessee. The Ld CIT(A) also confirmed the same.

12. The Ld A.R submitted that the assessee had taken over the Nelemangala project from original developer named M/s Kethamaranahalli House Building Co-op Society. He submitted that some of the advances were returned back in the subsequent year. The assessee has obtained confirmation letters and bank statements from two persons named Surya Sena Reddy and Pushpavathi. It has also obtained bank statement from Kurnool Gas Agency. One sale deed has been executed. The assessee also filed these documents before the AO, but it could be filed after completion of assessment. The Ld A.R submitted that the ld CIT(A) also did not examine these documents, even though they were brought to his notice.

13. We heard Ld D.R and perused the record. There is no dispute that the onus is cast upon the assessee to prove the cash credits received by it. We notice that the assessee has furnished certain documents in respect of some of the advances. It has also given explanations with regard to certain other advances. None of these documents and explanations has been examined by the tax authorities. Accordingly, we are of the view that this issue also requires examination at the end of the AO. Accordingly, we set aside the order passed by Ld CIT(A) on this issue and restore the same to the file of the AO for examining it afresh.

14. After affording adequate opportunity of being heard, the AO may take appropriate decision in respect of all the above said issues in accordance with law.

15. The last issue urged by the assessee relates to charging of interest u/s 234B of the Act. This is consequential in nature.

16. In the result, the appeal of the assessee is treated as allowed for statistical purposes.