GST Officers cannot treat themselves as Police Officers, cannot indulge in acts of physical violence against suspects of tax evasion 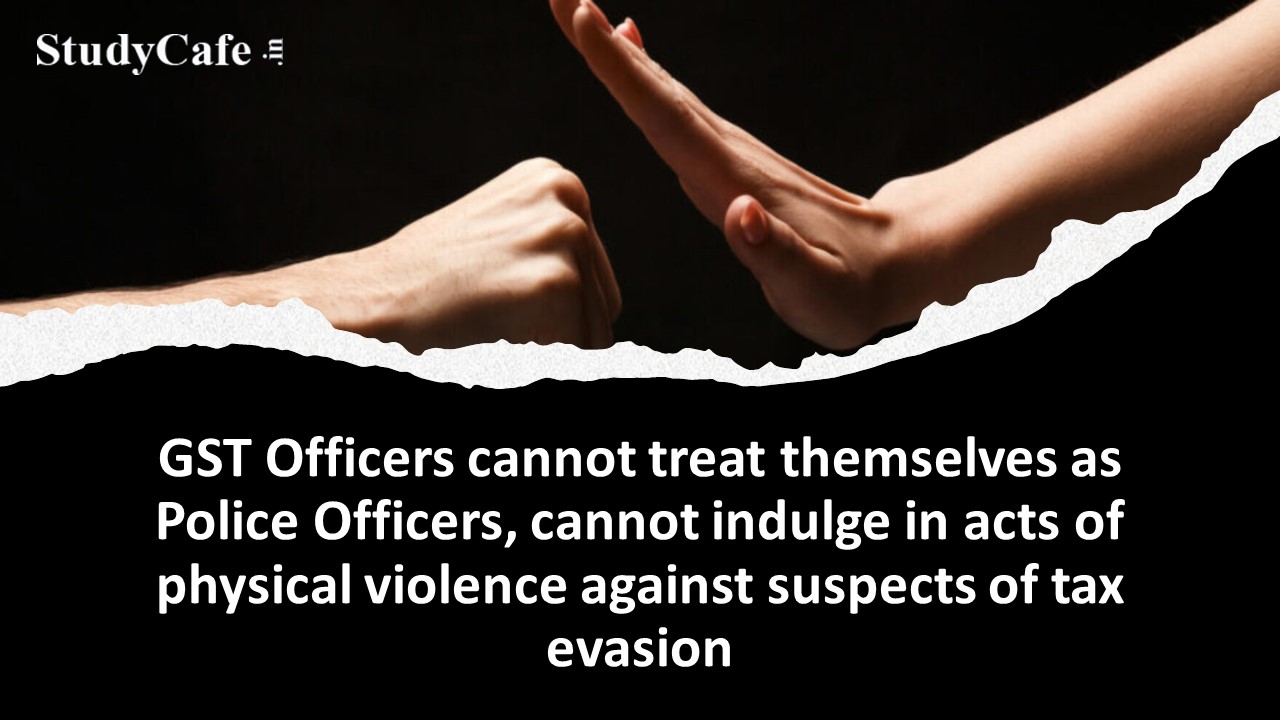 GST Officers cannot treat themselves as Police Officers, cannot indulge in acts of physical violence against suspects of tax evasion

In matter of M/s Agarwal Foundries Private Limited Rama Towers and 3 others v/s Union of India and 9 others, the honorable Telangana High Court has said that GST Officers cannot treat themselves as Police Officers, cannot indulge in acts of physical violence against suspects of tax evasion.

Facts of the Case

They completely co-operated with the search operations conducted on 11.12.2019.

8. It is contended that when petitioner nos.2 and 3 were requesting repeatedly the respondents not to resort to violence and to spare the 4th petitioner, respondent nos.5 and 6 committed aggravated assault on the person of the 3rd petitioner and grievously hurt his leg.

9. According to petitioners, the 3rd petitioner was unable to stand and with the help of employees of the 1st petitioner, he was rushed to the Sunshine Hospital as a Medico-Legal case. Copy of the Out-Patient Discharge advice is filed as Annexure P-4 along with the Writ Petition which indicated that there was a blunt injury to the thigh of the 3rd petitioner on account of the assault on his person, and he was discharged at 07:45 p.m. by the said hospital.

10. Prior thereto, a complaint appears to have been made by the employees of petitioners by dialing phone number 100 ( to contact the local police) at 06:39 p.m.; an acknowledgment of receipt of the said call with Case I.D.No.20190021545598 was given; and the said case was assigned to Mahankali Police Station, Secunderabad with assurance that concerned officer will contact the complainant soon. This is filed as Annexure P.5 by the petitioners.

11. According to petitioners, though some Police Officials arrived at the office premises of the 1st petitioner, they refused to take any action due to the insistence of the respondents.

12. Petitioners allege that respondent nos.5 to 9 continued the alleged search till midnight on 11.12.2019 and during the course of the same, they allegedly coerced petitioner nos.2 and 4 to sign a prepared statement without even allowing them to read or verify its contents.

16. Petitioners allege that the said F.I.R. was lodged as a counter-blast to the complaint lodged by the employees of the 1st petitioner with the Police at 06:39 p.m. on 11.12.2019 with false allegations.

18. Petitioners allege that they have no intention to scuttle any enquiry initiated against them under the C.G.ST. Act, 2017 and would co-operate with the said enquiry, but the respondent nos.2 to 9, being statutory authorities, are not entitled to violate the petitioners’ life and liberty contrary to Article 21, and they cannot subject the petitioners to torture or physical violence.

25. It is contended by the respondents 1 to 4 and 10 that the petitioners are not cooperating with the investigating agency; they are not joining inquiries; vide letter dt.23.12.2019, petitioners 1 and 2 were requested for appearance before the Senior Intelligence Officer on 30.12.2019 for forensic examination of certain electronic devices; vide letter dt.28.12.2019, the 1st petitioner did not agree for appearing before the officers of the 2nd respondent; vide summons dt.31.12.2019, Pramod Aggarwal, 2nd petitioner, has been summoned for 06.01.2020 to witness the forensic examination of the electronic devices; that the inquiries are being conducted in a fair manner by the respondents strictly in accordance with law under the supervision of senior officers.

26. It is contended that preliminary investigation in the matter has revealed evasion of GST of Rs.5,00,00,000/- by 1st petitioner and this quantum is expected to increase substantially as analysis of all kacchi parchis, digital documents and fake invoices is being conducted.

27. It is contended that during the course of search operation petitioners 2 to 4 tried to hamper and obstruct by way of physical assault on two officers of the rank of Deputy Directors; that 3rd petitioner allegedly fled away from the scene with crucial evidence; subsequently police protection was sought and search proceedings were concluded under police protection; F.I.R.No.232 of 2019 had to be lodged against petitioners 2 to 4 with Hyderabad Police under Sections 186, 332, 504 and 506 of IPC when the 5th respondent was allegedly hit on his mouth and jaw by employees of the petitioners; that petitioner No.3 went to a private hospital of his choice and he had not been taken there by police officials which implies that he wanted to implicate Officers of DGGI in a false case.

29. According to them, petitioner No.3 called petitioner Nos.2 and 4 at the premises of petitioner No.4 and they started obstructing the official work under a criminal conspiracy and petitioner no.3 allegedly ran away with crucial evidence on the pretext of being injured.

30. They contended that the search proceedings were carried out under proper and applicable law and procedure, and no harm or damage were done to any human/person or property and no sentiments were hurt which was also clearly mentioned in the panchanama dt.11/12.12.2019 drawn on spot in the presence of two independent witnesses and the copy of the same was given to one of the staff of petitioner No.2.

31. It is contended that there was necessity to record statement of 2nd petitioner (in pursuance of summons issued under Section 70 of CGST Act, 2017) on the spot as preliminary investigation clearly suggested his role in the tax evasion by petitioner No.1; that he was available at the spot i.e. Corporate Office of petitioner No.1 and so he was served summons in his office after midnight, in the early hours of 12.12.2019. According to the respondents, there is no bar in making enquiries under Section 70 of GST Act, 2017 in the night.

32. The respondents state that it is absurd that the petitioners can claim that anyone can threaten a local business tycoon in the presence of local police.

33. It is stated that only the complaint of respondent No.9 was taken cognizance by the police and not that of the petitioners and this itself is a testament to the veracity of the complaint made by the 9th respondent.

34. It is stated that the officers of respondent No.1 were rational and professional in their conduct and behaviour, and on the contrary, the language of petitioner No.2 to 4 was discourteous and provocative, aiming to irritate and annoy the search team. However, the Officers, using their wisdom and experience, remained calm and composed throughout the search proceedings, despite incitement, non-cooperation and provocation on the part of petitioners.

35. It is alleged that the allegation of torture was made by the petitioners to deliberately get the investigation in the matter transferred from respondent No.1 to respondent No.10 or any local GST Wing with an ulterior motive to influence the investigation and its outcome in their favour by using their local influence and clout. It is stated that Officers of respondent No.1 are responsible officials and they would not do anything which violates basic human and fundamental rights of the citizens of the country.

36. They contended that the present Writ Petition is not maintainable either in law or on facts and that there are disputed questions of facts which cannot be determined in Writ jurisdiction.

37. It is contended that the officers posted at the Headquarters of the DGGI at New Delhi have all India jurisdiction while the officers posted at DGGI, Hyderabad Zonal Unit have only local jurisdiction and wide ranging investigation has therefore to be conducted as the case has ramifications outside Hyderabad; DGGI, Hyderabad Zonal Unit have limited manpower and resources to investigate such a serious offence of a large scale and ramifications across India; almost every major case, irrespective of the Zonal Unit to which it pertains is investigated at Delhi; any interference by this Court will prejudice the investigation.

38. According to the respondents, investigation cannot be transferred and assistance of lawyer cannot be allowed while examination of a person is being done under the CGST Act. It is alleged that investigation into an offence is the statutory function of the police, that superintendence thereof is vested in the State Government and the Court is not justified, without any compelling and justifiable reason, to interfere with investigation. According to the respondents, frequent interference by superior Courts at interlocutory stages tends to defeat the ends of justice.

39. They relied on the decisions in Rakesh Bagla Vs. Director General Anti Evasion1, P.V.Ramana Reddy and others Vs. Union of India2, and decisions of Delhi High Court in W.P. (Crl) No.2686 of 2019 – Sudhir Kumar Agarwal Vs. DGGI, and Sudhir Gulati Vs. Union of India3 and Poolpandi Vs. Superintendent, Central Excise.

Click on the below-mentioned link to read the full case