As the Reserve Bank (RBI) has announced the launch of the first pilot for the retail digital Rupee on December 01, 2022, let’s know about Central Bank Digital Currency (CBDC).

Eight banks have been identified for phase-wise participation in this pilot. The first phase will begin with four banks, viz., State Bank of India, ICICI Bank, Yes Bank and IDFC First Bank in four cities across the country. Four more banks, viz., Bank of Baroda, Union Bank of India, HDFC Bank and Kotak Mahindra Bank will join this pilot subsequently. The pilot would initially cover four cities, viz., Mumbai, New Delhi, Bengaluru and Bhubaneswar and later extend to Ahmedabad, Gangtok, Guwahati, Hyderabad, Indore, Kochi, Lucknow, Patna and Shimla. The scope of pilot may be expanded gradually to include more banks, users and locations as needed. 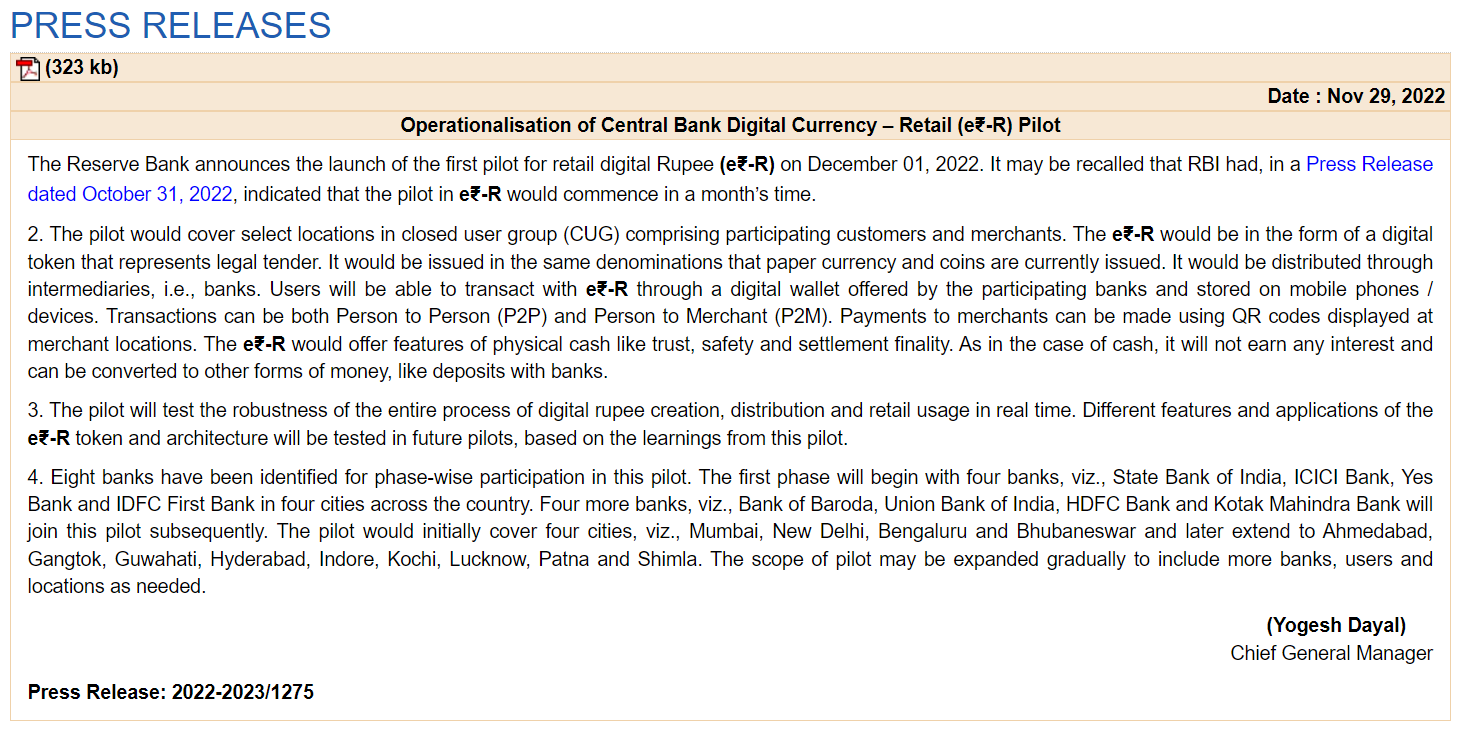 What is Central Bank Digital Currency?

Central Bank Digital Currency (CBDC) is a digital form of currency notes issued by a central bank. The same will provide additional options to the currently available form of money.

What are the different forms of Digital Currency?

CBDC can be classified into two broad types viz. general purpose or retail (CBDC-R) and wholesale (CBDC-W). Retail CBDC would be potentially available for use by all viz. private sector, non-financial consumers and businesses while wholesale CBDC is designed for restricted access to select financial institutions. While Wholesale CBDC is intended for the settlement of interbank transfers and related wholesale transactions, Retail CBDC is an electronic version of cash primarily meant for retail transactions.

It is believed that Retail CBDC can provide access to safe money for payment and settlement as it is a direct liability of the Central Bank. Wholesale CBDC has the potential to transform settlement systems for financial transactions and make them more efficient and secure. Going by the potential offered by each of them, there may be merit in introducing both CBDC-W and CBDC-R.

What are the different forms of CBDC?

CBDC can be structured as ‘token-based’ or ‘account-based’.

What are various model for issuance of this currency?

A) Single Tier model – This model is also known as “Direct CBDC Model”. A Direct CBDC system would be one where the central bank is responsible for managing all aspects of the CBDC system including issuance, account-keeping, transaction verification et. al. In this model, the central bank operates the retail ledger and therefore the central bank server is involved in all payments. In this model, the CBDC represents a direct claim on the central bank, which keeps a record of all balances and updates it with every transaction. It provides an advantage of a very resilient system as the central bank has complete knowledge of retail account balances which allows it to honour claims with ease since all the information needed for verification is readily available. The major disadvantage of this model is that it marginalises private sector involvement and hinders innovation in the payment system. This model is designed for disintermediation where central bank interacts directly with the end customers. This model has the potential to disrupt the current financial system and will put additional burden on the central banks in terms of managing customer on-boarding, KYC and AML checks, which may prove difficult and costly to the central bank.

B) Two-Tier Model (Intermediate model) The inefficiency associated with the Single tier model demands that CBDCs are designed as part of a two-tier system, where the central bank and other service providers, each play their respective role. There are two models under the intermediate architecture viz. Indirect model and Hybrid Model.

Hybrid Model – In the Hybrid model, a direct claim on the central bank is combined with a private sector messaging layer. The central bank will issue CBDC to other entities which shall make those entities then responsible for all customer-associated activities. Under this model, commercial intermediaries (payment service providers) provide retail services to end users, but the central bank retains a ledger of retail transactions.

This architecture runs on two engines: intermediaries handle retail payments, but the CBDC is a direct claim on the central bank, which also keeps a central ledger of all transactions and operates a backup technical infrastructure allowing it to restart the payment system if intermediaries run into insolvency or technical outages. 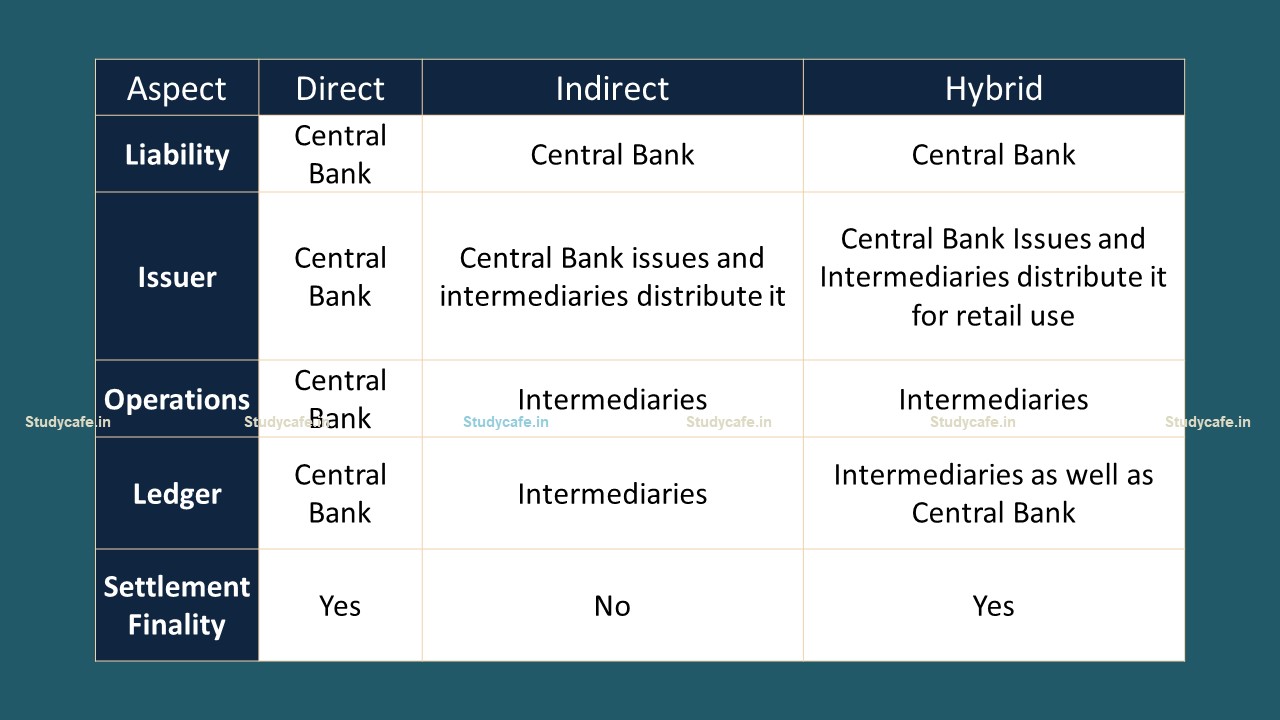