2. The only effective issue to be decided in the appeal of the Revenue is as to whether the Ld.CIT(A) was justified in allowing the claim of long term capital loss of Rs.2,85,61,088/- on sale of 6,44,285 equity shares of M/s Sparsh BPO Services Pvt Ltd, in the facts and circumstances of the instant case.

3. We have heard the rival submission and perused the material available on record.

5. In the course of the assessment proceedings, by a letter dated 31.08.2016, Intelnet Global Services Pvt. Ltd. raised an objection stating that the notice issued u/s 148 was not a valid notice inasmuch as it was issued to the person who had ceased to exist. The Ld. AO disposed of the objections of the assessee by the order dated 10.11.2016. Thereafter the Intelnet Global Services Pvt Ltd. filed another letter dated 08.12.2016 raising fresh objections to the reopening u/s 148 of the Act. Eventually, the Ld. AO passed an order u/s 143(3) r.w.s. 147 of the Act determining the total income of the assessee at Rs.3,09,659/-.

6. We find that assessee is engaged in the business of IT & IT enabled services. The Ld.AO observed that assessee on 30/7/2010 sold 6,44,285 equity shares in M/s Sparsh BPO Services Pvt Ltd for Rs.12,88,57,000/-. These shares were purchased by the assessee on 7/7/2008 for Rs.12,88,57,000/-. The Ld.AO observed that as on the date of sale of these shares, the assessee (SKR BPO) was very much in existence and the assessee, namely, SKR BPO, got amalgamated with the erstwhile company, M/s Serco BPO with effect from 7/7/2011. The Ld.AO observed that the shares in M/s Sparsh BPO Services Pvt Ltd was valued at Rs.200/- in the balance-sheet of SKR BPO which continued to be valued at Rs.200/- per share in the balance-sheet of M/s Serco BPO, after the sale of shares by SKR BPO. He observed that at the same time, Serco BPO became eligible to carry forward the long term capital loss incurred by SKR BPO consequent to the amalgamation. Accordingly, the Ld.AO held that SKR BPO sold the shares at purchase cost only with a view to claim fictitious losses and concluded that the sale transaction was not a genuine transaction and was a colourable device. With these observations, the Ld.AO proceeded to disallow the claim of long term capital loss of Rs.2,85,61,088/-.

7. We find that SKR BPO had been amalgamated with Serco BPO with effect from 7/7/2011 vide order of approval of merger passed by the Hon’ble Bombay High Court dated 5/3/2013. The computation of long term capital loss on sale of shares of M/s Sparsh BPO Services Pvt Ltd arose in the instant case, only due to benefit of indexation that is statutorily available to an assessee. The workings of the said long term capital loss are as under:- 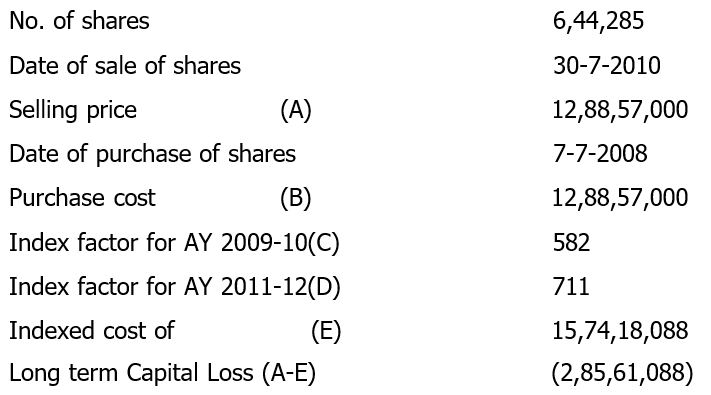 8. The assessee had submitted that the shares of M/s Sparsh BPO Services Pvt Ltd were sold at Rs.200 per share (i.e. the purchase cost) though the market price of the said shares as per Bombay Stock Exchange on the date of sale was only Rs.58 per share. We find that the long term capital loss incurred by the assessee was disallowed by the Ld.AO only on the ground that it was a colourable device as the loss is transferred in the hands of M/s Intelnet Global Services Pvt Ltd on subsequent merger / amalgamation. It is pertinent to note that the scheme of amalgamation had been duly approved by Hon’ble Bombay High Court wherein the treatment of various taxes including indirect taxes had been provided in detail and the Income-tax department being part of Union of India has been given due opportunity before approval of the scheme of amalgamation. Admittedly, the transaction of sale of shares on 30/7/2010 happened much prior to the date of agreement i.e. 7/7/2011. At the time of sale of shares on 30/7/2010, it would not be possible to even pre-empt that a scheme of amalgamation would be filed and the same would get approved by the Hon’ble Bombay High Court. As stated earlier, it is not in dispute that assessee had sold the shares @ Rs.200/- per share being the purchase cost. The sale price of Rs.200 per share has not been disputed by the Revenue at all. In fact, the market price as per the Bombay Stock Exchange on the date of sale was only Rs.58/- per share whereas the assessee has sold the shares at much higher price of Rs.200/- per share. Merely because this transaction had resulted in long term capital loss which had also admittedly arose only due to the benefit of indexation which is statutorily available to the assessee, the Revenue in the instant case is trying to treat the entire transaction as a colourable device and making the assessee act as a conduit to enable the merged entity to have the benefit of carry forward of loss. All these allegations are made by the Ld.AO absolutely without any basis. In fact, this is a classic case where the Ld.AO had denied the benefit which is statutorily available to the assessee as per the Act. In any case, the scheme of merger had already contemplated these transactions of loss on shares by including the same in the scheme and had also considered the loss incurred by the transferor company getting vested with the transferee company pursuant to the scheme of amalgamation. This scheme of amalgamation has been approved by the Hon’ble Bombay High Court vide its order dated 5/3/2013 with effective date of 7/7/2011. Now once the scheme of amalgamation has been approved by the Hon’ble High Court, all the assets and liabilities of the transferor company including the losses would get automatically vested with the transferee company. The same cannot be disturbed or disputed by the Ld.AO at the time of implementation of the scheme of amalgamation. This aspect has been duly appreciated by the Ld.CIT(A) while granting relief to the assessee in para 9.4.1 of his order. In fact, similar issue was adjudicated by the co-ordinate bench of Kolkata Tribunal, which was authored by the undersigned, in the case of Electrocast Sales India Pvt Ltd vs Deputy CIT reported in 64 ITR (Trib) S.N.13 (Kol) dated 9/3/2018 wherein it was held as under:-

“Held, that the scheme of amalgamation would be approved by the High Court only after ensuring that the scheme was not prejudicial to the interests of the members of the companies or to public interest. The merger scheme approved by the High Court having in mind the larger public interest could not be disturbed by the Department merely because the assesses was not entitled to the benefits under section 72A, If the Department had any objections it could have raised them prior to sanction of scheme by the court. Once the scheme was approved, it implied that the merger scheme had been done after duly considering the representations from the. Government. The Department had not filed any appeal under section 391(7) of the Companies Act, 1956 against the order of sanction of the amalgamation by the High Court. Therefore it would be clearly barred In/ the doctrine of acquiescence and estoppel. The. accumulated losses of the amalgamating companies, comprising unabsorbed short term capital loss of Rs. 10,26,44,123, unabsorbed long-term capital loss of Rs. 6,34,784 and unabsorbed business loss of Rs. 6,63,574, would belong to the amalgamated company pursuant to paragraph 10(iii) of the scheme of amalgamation which was approved by the High Court. Since the losses belonged to the amalgamated company, i. e… the. assessees, the provisions of section 72 and section 74 would come into play with respect to set off thereof against the respective incomes of the assessee. In view of this, the non-compliance, of section 72A as held bi/ the Commissioner (Appeals) did not hold any water.”

9. Moreover, we further find that the Hon’ble Jurisdictional High Court in the case of Sadanand S Varde & Ors vs State of Maharashtra & Ors reported in 247 ITR 609 (Bom) had categorically held that order of the Company Court sanctioning the scheme of amalgamation would be binding and the same cannot be permitted to be challenged in a collateral proceeding.

10. In view of the above, we do not find any infirmity in the order of Ld.CIT(A) allowing the claim of long term capital loss in the hands of the assessee company. Accordingly, grounds raised by the Revenue are dismissed.

11. Since the relief is granted on merits, we do not deem it fit to adjudicate the grounds raised by the assessee in its Cross Objection challenging the validity of re-assessment. No opinion is rendered herein by us on the same and they are left open.