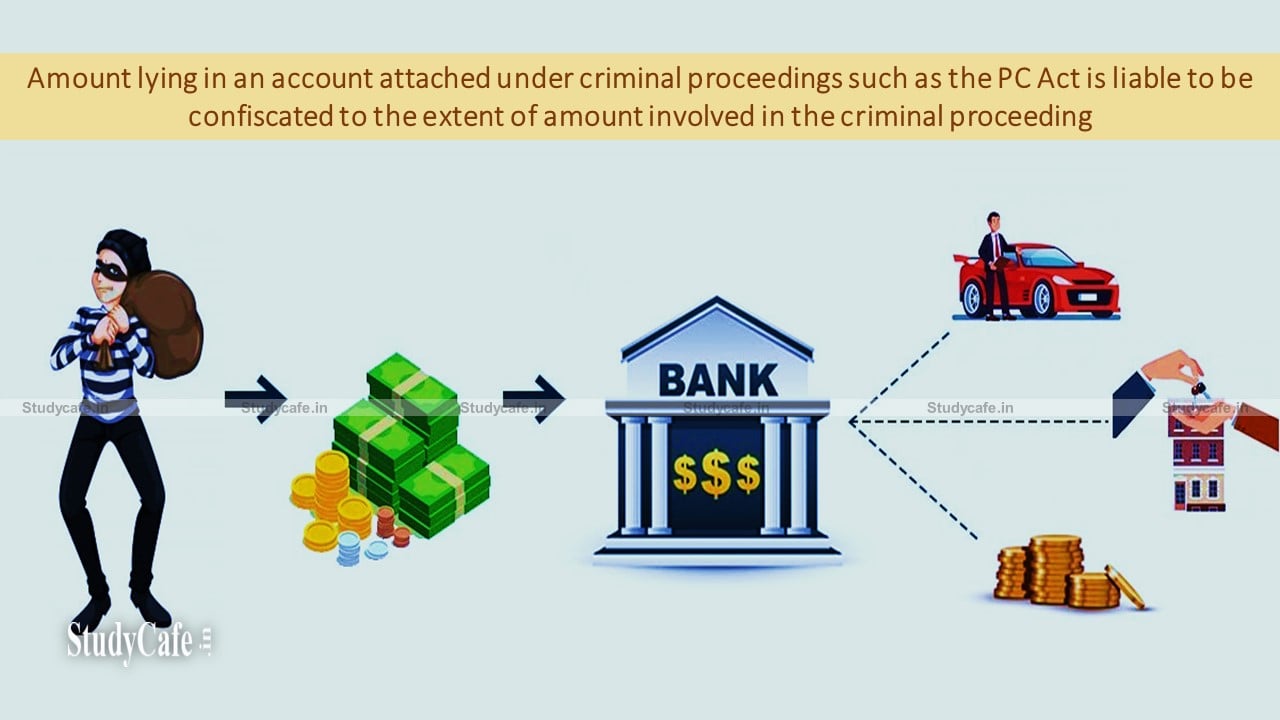 In a case registered under Prevention of Corruption Act, CBI sought freezing of the accounts in London, however, thereafter, filed a final report which was not accepted by the learned Special Judge and on further investigation, a charge sheet under Sections 420/120B IPC only has been filed and not under the provisions of the Prevention of Corruption Act, whereas, after the assessment was conducted, the Income Tax Authorities filed an application before the learned Special Judge, CBI, Tis Hazari seeking de-freezing of the accounts under Section 226(4) of the Income Tax Act so as to enable it to recover the tax demand . The Hon’ble Delhi High Court dealt with the question that whether the entire amount frozen in London and transferred to India is the case property or alleged proceeds of the crime and may be liable for confiscation in case the petitioner’s are convicted and thus cannot be utilized for fulfilling the tax demands due against the petitioners.

It was held that the entire amount received which was frozen and received in India lying deposited in the name of learned Special Judge at SBI, Tis Hazari is not the amount transferred by foreign entity in relation to this transaction only. The amount which does not relate to the impugned transaction alongwith the interest accrued thereon was released to the income-tax authorities.

i. An FIR was lodged on 06.03.2006 by the CBI on a reliable information that certain officials of the National Thermal Power Corporation Ltd. (NTPC) entered into a criminal conspiracy with the GRUP VO TECHNOPROMEXPORT RUSSIA (in short, “M/s. T.P.E. Russia”) and its associate companies in the years 2002 to 2005, in pursuance whereto, in the year 2005 an amount of US$ 20 million was paid/received against illegal gratification/kickbacks in the bank account of the petitioner M/s. Ravina & Associates Pvt. Ltd. (in short „RAPL‟) in U.K.

ii. A letter rogatory was issued for freezing of accounts of petitioners herein M/S Ravina and RAPL. The Ld. Trial Court ordered further investigation. As a result of the same a charge sheet was filed against M/S. T.P.E. Moscow Russia, and its representative directors and the petitioners herein. The charges were levelled u/s 420 read with 120 BIPC.

iv. However, no cognizance was taken by the Ld. Special judge, at the trial court on the aforesaid charge sheet filed and it ordered further investigation again. The said order was challenged before the Hon’ble High Court of Delhi.

v. It is contention of CBI that M/s. TPE Russia on receiving funds from NTPC paid illegal gratifications to petitioner no.1 RAPL which have been detailed in the additional affidavit filed by the CBI. An application was filed under section 226(4) of the Income Tax Act by the Income Tax Department for recovery of the tax demand due towards the 2 petitioners. Since, the petitioners were maintaining the accounts with National Westminster Bank, London which has frozen by the order of the Special Court and could not be operated, the Income Tax Department sought recovery of the outstanding tax demand from the amounts lying deposited.

vii. This amount so frozen at the National West Minister Bank, London was transferred to Account No. 33629397157 opened on 31st January 2014 in the name of Special Judge CBI-01 at the Tis Hazari Branch of State Bank of India.

viii. Assessment of the income tax demand qua the petitioners was carried out and vide order dated 7th January, 2010 a total demand of ₹55,16,66,015/- was made, out of which ₹25,50,518/- had been recovered through attachment of bank accounts and the balance demand of ₹54,91,15,497 is pending. The Petitioners filed an appeal for stay before the CIT which was however, rejected.

ix. Petitioners thereafter filed writ petitions seeking stay of recovery of the outstanding demand of ₹54,91,15,497 for the assessment years 2004-05, 2005-06 and 2006-07 in the case of petitioner No.2 or in the alternative the outstanding amounts be recovered from the accounts of petitioners in the NatWest Bank, London. However, vide judgment dated 20.04.2011 the Delhi High Court held that the petitioners were not entitled to the protection or benefit under Section 220(7) of the Income-Tax Act and held that the money in NatWest Bank, London is subject matter of the restraint order passed by the Court of U.K. on the letter of rogatory of the Special Judge, Delhi. The petitioner may not have any right to claim the said money, if it is corruption or bribe money.

x. Further, writ petitions were filed by the Petitioners before the Hon’ble High Court for expediting the disposal of application by the Special judge of income tax authorities u/s 226(4) of the Income Tax Act for defreezing of accounts under section 226 (4) of the Income Tax Act so as to enable it to recover the tax demand on 20.12.2008 itself. However the said application was dismissed.

xi. The issue before the Hon’ble High Court was that whether the entire amount frozen in London and transferred to India is the case property or alleged proceeds of the crime and may be liable for confiscation in case the petitioner’s are convicted and thus cannot be utilized for fulfilling the tax demands due against the petitioners.

It is further contended that even as per this charge-sheet, the entire amount received which was frozen and received in India lying deposited in the name of learned Special Judge at SBI, Tis Hazari is not the amount transferred by TPE in relation to this transaction only. Even as per the CBI there was one more transaction between TPE and the petitioners. Therefore, the amount which does not relate to the impugned transaction along with the interest accrued thereon be directed to be released to the income-tax authorities and in respect of the further amount of tax liability, the petitioner is willing to furnish an affidavit that in case the petitioners are convicted and the amount liable to confiscation, the same will be deposited by the petitioners.

Held: As per the reports filed by CBI, the amounts transferred by the TPE, Moscow to Petitioner RAPL in the NatWest Bank, London account, in relation to the impugned transaction are mentioned in some entries totaling to a sum of USD 2,15,71,843.90. However, the amount which was frozen and received in India is beyond the amount in relation to impugned transaction with TPE, Moscow. The amount received in excess of the amount received from TPE, moscow by Petitioner qua the impugned transaction cannot be prima facie termed as case property or the proceeds of the crime liable to be confiscated or for compensation in case the petitioners are charged and convicted. Consequently the learned Special Judge is directed to retain the amount received in lieu of the frozen amount of USD 2,15,71,843.90 along with the interest accrued thereon from the date of receipt till date and transfer the balance amount along with the interest accrued thereon received in the account at SBI, Tees Hazari, to the income-tax department.